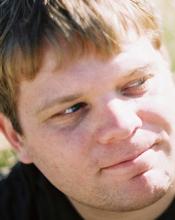 Writer and Reporter
Master of Arts, Class of 2008

Ted Wheeler can trace his success back to the two years he spent at Creighton University earning a master’s degree in creative writing.

For starters, “Welcome Home,” the story that initially brought attention to his work, was written and workshopped in a class led by Mary Helen Stefaniak, a novelist and professor of English and creative writing at Creighton.

People like Creighton professor Susan Aizenberg “helped foster a sense of confidence in my abilities that was crucial in sending out stories to magazines and, more importantly, played a role in the development of my style and subject focus that are the hallmarks of my work.”

Wheeler is a working fiction writer with more than 20 publications to his credit, including placement in the prestigious Best New American Voices series, and in respected literary journals such as Boulevard, The Kenyon Review, The Cincinnati Review and Confrontation.

“My fiction centers on the connection between militarism and violence during wartime, and how the spirit of small communities, whether urban or rural, can be formed by the lingering effect of historical trauma,” he explains.

In recent years he’s been working on “The Uninitiated,” a novel set in Omaha during the final years of World War I that follows a group of German-American immigrants escaping nationalist violence in their rural homes.

“My ‘day’ job, I suppose, although I work nights,” he jokes. Wheeler, who lives in Omaha, continues to be connected to Creighton. He’s in writing groups and remains friends with former classmates and professors.

His advice to students who want to succeed as writers: write daily.

“Getting down a few paragraphs in a spare 15 minutes is better than not doing so, right? Any small amount of effort that keeps you thinking about your work and craft is worthwhile.”

He also suggests being “greedy for experience.”

“Apply for any scholarship, fellowship or writer’s conference spot you think you can get, and a few you don’t think you can get. You must believe in the generosity of the world, that you will be taken care of one way or another when taking chances, even if you do fail.”