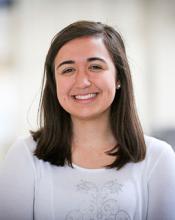 5 things I love about Creighton…
Sophie Snider shares her favorite things about life as a Bluejay, from social justice to social spaces on campus.

​Sophie Snider’s first experience with Creighton was when she tagged along on a campus tour with her older brother.

“That really piqued my interest,” she says. “I liked the classroom environment at Creighton, the way the faculty interacted with the students, and how eager to participate they were.”

When searching for colleges herself, she remembered the Creighton classroom experience and said it “just felt right.”

Now a senior, the Overland Park, Kansas, native is double-majoring in graphic design and English. While at Creighton, she discovered a passion for social justice and advocacy.

After graduating in May, Snider intends to participate in a post-graduate volunteer program.

Over fall break, Snider will lead a Service & Justice Trip through the Schlegel Center for Service and Justice. She will travel with a group of 12 students to Wheeling, West Virginia, to learn about coal mining and environmental justice.

While she’s heavily involved in social justice issues now, Snider says she didn’t understand or know about many of these issues in high school. “There’s an emphasis on social justice in every single aspect of campus, starting in freshman-year classes,” she says. “I think that has been the most formational part of my time at Creighton, for sure.”

“I think it’s rare to go to a school where the mission is so emphasized and talked about, even among students,” Snider says. “I love the Jesuit mission and the values.” One in particular that has really shaped her time at Creighton is ad majorem Dei gloriam, which means “for the greater glory of God.” “It encompasses the purpose behind all the other values,” she says.

The Skutt Student Center is Snider’s favorite spot on campus. “I spend all of my time there,” she says. “Even if it’s between classes, I’ll go to Skutt for five minutes.” The building is a very social spot, she says, and a great place to strike up a conversation with a new or old friend. “It’s the central hub of the Creighton student community,” she says. “I’ve made a lot of friends there.”

In addition to leading a fall break service and justice trip this year, Snider has gone on three other fall or spring break trips through the Schlegel Center for Service and Justice. She’s traveled to Cleveland to learn about homelessness; El Paso, Texas, to learn about immigration issues; and the Winnebago Reservation in northeastern Nebraska to learn about Native American issues. “The program has really changed the way I see the world and the way I see myself,” Snider says.

“I wouldn’t have considered myself a leader at any other school or in high school,” Snider says. “But there are so many opportunities to grow as a leader at Creighton.” This formation begins during Welcome Week and freshman year. She cites the College of Arts and Sciences Dean’s Fellows program in particular for helping her develop her leadership skills.