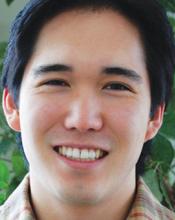 The warmth Rance Fujiwara, BSCHM’13, felt at Creighton University helped him transition from his tropical hometown of Honolulu, Hawaii, to life in Omaha.

Fujiwara, who now attends Yale School of Medicine, learned of Creighton through his father, who attended Creighton as an undergraduate and medical school student.

While visiting Creighton the summer before his junior year in high school, Fujiwara says he was drawn to the “comforting atmosphere at Creighton and I appreciated the close interactions students could develop with the faculty.”

It’s those friendships and mentorships he enjoyed with professors that he cherishes most. He recalls several instances that demonstrated professors’ devotion to their students:

He spent 50 hours a week in the research lab with professor and researcher Brad Parsons, machining metal pieces for the high vacuum chamber and optimizing a dye laser and optics setup, but also talking on a personal level with Parsons.

During his freshman year, when he had a time conflict between his chemistry and Latin courses, Latin professor Christina Clark offered to sacrifice her free time to teach him in her office.

When he was the only student as a senior to sign up for thermodynamics, professor Mark Freitag met with him regularly to discuss the material in greater detail rather than cancel the class.

While at Creighton, Fujiwara received the Classical Association of the Middle West and South Manson A. Stewart Scholarship for studies in classics, and twice earned the Ferlic Summer Undergraduate Research Scholarship. All of these experiences led to an extraordinary liberal arts education that helped him get admitted to Yale and changed his life.

“It allowed me to grow in a comfortable city and environment, and it gave me the opportunity to study chemistry and classics from some of the most sincere and intelligent people I will ever meet,” he says.