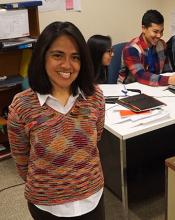 Patricia Soto Becerra, PhD, associate professor of physics, loves when her students discover “the joy of doing,” which happens often in her computational biophysics laboratory.

If Patricia Soto Becerra, PhD, ever needed proof that everyone is unique, she found it in her experiences teaching and researching. Grasping this truth has led her to push students to excel in the areas where they are strongest. It’s one thing to be smart – and there are many smart students at Creighton – but, Soto says, “cleverness is identifying and building on the skills each person has.”

At Creighton, this is called “cura personalis” – care for the whole person as an individual. It’s a concept – or charism – that can be found everywhere at Creighton, including in Soto’s computational biophysics laboratory.

“I used to simply have a standard – ‘up here’ – that I expected students to meet,” Soto says. “I still have that standard, but now I meet students where they are, providing the scaffolding to help them reach it.” That scaffolding might look different for each student, but most of them arrive at the same destination.

It helps that, in the lab and classroom, her students learn by doing, whether building an electrical circuit that models signal transmission along nerve axons or using a programming language to produce a visual representation of data (as in this photo). Seeing a visual representation is often what hooks students who end up joining Soto’s research team. It’s the feeling of seeing the abstract concepts they learned become more concrete – and, often, participating in the process.

One student, for example, turned a coding homework assignment into a full program with a graphical interface, on his own. Kian Maleki has presented this work and is working with Soto on a paper that they will submit for publication. “He discovered ‘the joy of doing’” – not motivation from any external reward, but being driven by the fulfillment of creating something new.

Using Physics to Understand the Brain

Right now, Soto’s research team is studying how prion proteins in the brain misshape and clump together, a process associated with neurodegenerative diseases, including Creutzfeld-Jakob disease (CJD) in humans – the same family as “Mad Cow Disease” in cattle and chronic wasting disease (CWD) in deer.

To understand the prion proteins’ behavior, the researchers use structural bioinformatics, a collection of computer-based tools. Essentially, Soto explains, “we “blend physics and chemistry with computer modeling to further our understanding of a tiny little piece of the brain.” Ultimately, the team hopes to learn how the prion proteins become misshapen, to lead to a conceptual framework that will explain the link between protein accumulation and prion diseases.

Working Together, at Their Own Pace

Even the most curious and motivated student could be understandably intimidated by such a goal. But, Soto says, her students have no need to be overwhelmed. She observes each student and, taking care to avoid bias or judgement, she gauges what is unique about each of them and how to maximize those strengths.

“I might push one student this way and this one the other way, perceiving their progress,” Soto says. “I tell students to work at their own pace–but I request that they develop a routine.” This helps each student to work in the way that equips her or him for success.

Naturally, throughout the research process, students learn many skills that may seem unrelated to physics. Working as a close-knit team, they learn how to stay accountable to one another so that the group as a whole can keep up its momentum. Keeping their fellow team members updated builds communication skills – “in science you have to learn how to communicate,” Soto says.

She mentors students on “soft skills” like communication as much as any skills specific to physics. Students are encouraged to “own” what they learn. “In parallel with [teaching] technical knowledge, I have been working a lot [with students] on awareness of how they learn – I have developed tools to help with metacognition” – that is, helping students gain the ability to think about how they think, and, in turn, how they learn and work best. “It’s not what Newton said more than three centuries ago, but it is how you see it and how you own it.”

Many of Soto’s students plan to pursue medical school, and they enter her class with earning a high grade as their number one motivator. But after taking her class, she says, “I can tell they are aware of the need for basic science.” Soto’s passion for the sciences and scientific research is unmistakable and contagious. “There is something very powerful in the abstraction that we make of nature,” she says. “It is beautiful. It requires lots of sophisticated thinking, but it fills me with joy.”