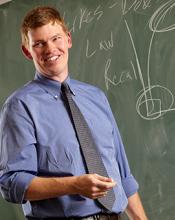 Matthew Huss, PhD, a professor of psychology, says his goal in the classroom is to capture his students’ attention—and keep it.

Matthew Huss, PhD, a professor of psychology who joined the Creighton University faculty in 2000, says his goal in the classroom is to capture his students’ attention—and keep it.

Apparently he’s doing a fine job of that.

Huss was named the 2013 U.S. Professor of the Year state recipient by the Council for the Advancement and Support of Education (CASE) and the Carnegie Foundation for the Advancement of Teaching. The program salutes the most outstanding undergraduate instructors in the country—great teachers who positively influence their students’ lives and careers.

Also in 2013, he received a Dean’s Award for Excellence in Scholarship. In 2016, he received the competitive American Psychology-Law Society Outstanding Teaching and Mentoring in the Field of Psychology and Law Award.

“He is undeniably a most gifted teacher, a competent and skillful teacher in every sense,” says colleague Gary Leak, PhD.

To capture—and hold—his students’ attention, Huss imparts information that is worth their time and inspires them to learn even more on their own.

Valerie Gonsalves, BA’04, PhD, a 2004 graduate of Creighton and a psychologist in Madison, Wis., says Huss “acknowledges the inherent humanness of every individual.

“He interacts with students in a way that allows them to feel both encouraged and respected,” she says.

“He brings psychology to life,” says another former student, Leah Georges, BA’06 (who is now a professor herself).

Huss says he strives to be as effective in the classroom as the late Harry Kirke Wolfe, a prominent early American psychologist and a Nebraska legend who died in 1918.

“His standing-room-only lectures were said to be so interesting that students applauded at their conclusion,” Huss says. “Three of his students later became presidents of the American Psychological Association. What better measure of success than to see your students achieve prominence in the field?”

Huss has published a prominent textbook in forensic-clinical psychology and is often called upon to testify as an expert witness, applying psychological findings to the courtroom.

His research interests are in law and psychology and forensic-clinical psychology. “My primary interests are the prediction of violence, domestic violence and sex offenders,” he says. He is also interested in nonclinical areas, such as jurors’ notions of insanity and the admissibility of scientific evidence.