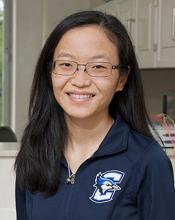 If you met Mary Elizabeth Yeh and had to decide which Harry Potter character most resembles her, it would be Hermione – brainy, resourceful and determined. A senior neuroscience major (and Harry Potter fan), she is in the Honors Program and multiple honor societies. She does research with the Department of Psychology and the Department of Pharmacology. She serves as the secretary of Courage Club – a new group at Creighton that fights sex trafficking, stays involved in Kappa Kappa Gamma, and participates in organizations including the Hawai’i Club – she hails from Honolulu – and Pre-Medical Society.

As she looks forward to graduating in May 2018 and reflects back on the last couple of years at Creighton, what stands out among her varied experiences is her research. She has worked with professors and peers on several research projects related to neuroscience. In such a multifaceted field, countless avenues for research exist. Most larger universities offer far fewer opportunities, if any, for undergraduate students to work closely with faculty experts on hands-on research. Yeh has been grateful to get connected to multiple research experiences at Creighton that align with her interests.

Her natural curiosity sparked her involvement in research. Initially, it gave her a way to take an in-depth look at a field she was interested in. It allowed her to find her niche and grow an appreciation for academic research. “Research is kind of like shadowing,” she says. “Students shadow doctors to get a feel for which specialties pique their interest. My research has helped me figure out which parts of neuroscience most interest me. Plus, research makes medical advancements possible.”

It started after Yeh took a psychology class taught by Maya Khanna, PhD, professor of psychology (shown with Yeh). Khanna is involved in a huge multi-year National Science Foundation (NSF) project to map development of the adolescent brain – an area that is not yet fully understood. Yeh worked on a component of Khanna’s project that involved analyzing the impact of lead exposure on brains of young people. Through funding available through the Center for Undergraduate Research and Scholarship (CURAS), Yeh spent Summer 2016 focusing on data analysis and presented her findings that fall.

Can Exercise Help You Learn?

This past summer, she took on a new question about the brain – probably one that some students have asked themselves: Does exercise help you learn? She is working with students and faculty within the Department of Exercise Science & Pre-Health Professions and Department of Psychology to find out.

In particular, their project mixes linguistics with exercise science. It investigates whether exercise influences a person’s ability to generate words that have select characteristics. For example, she says, “If you take the word ‘grass’ you can imagine it easily – but the word ‘growing’ is more abstract, and harder to visualize.” For this project, Yeh is gathering data directly from her peers – Creighton students can get credit for participating as research subjects. Yeh asks questions before, during and after the students exercise on a stationary bike (an ergometer) to analyze patterns in their answers and whether they change with exercise.

While researchers agree that exercise increases blood flow to the brain and offers many benefits including cognitive ones, Yeh notes that this study is important because there is little research on these effects in traditionally college-aged students. The study findings “could affect me as a student, especially because I have some academic challenges ahead.”

Those challenges could include studying for the Graduate Record Examination (GRE®) to apply for graduate school and the Medical College Admission Test® (MCAT®) to apply for medical school. She plans to earn a master’s degree in neuroscience or pharmacology before applying to medical school. Once data collection concludes, she will work with Professor Khanna on a manuscript of her research to submit to a peer-reviewed scientific journal. The keen analytical mind that she has honed through participating in research will surely help her navigate those challenges. Ultimately, she wants to become a brain surgeon.

Rolling with the Punches

Yeh notes one unexpected way that research is preparing her for her future: teaching her resilience. Though she has found success when applying for research programs, she notes that some rejection is bound to come along with this process. However, that has helped her learn to “roll with the punches.” She says, “I have had to learn to handle [rejection] and move on, using those experiences to reinforce what I really want to do” – the goals she’ll never give up on.

Overall, she says, her research experiences have been “invaluable to how I want to approach what I do in the future. Rather than hesitantly saying, ‘I guess I could do this,’ I have been able to refine and be confident in the vision I have for myself. Reinforcing what I want to do – study the brain – has been significant this past year.”

A Second Home in Omaha

Beyond research, Yeh has appreciated the social and spiritual aspects of life in the Creighton community. Though her family is an ocean away, she says “it was a good thing that I came here and didn’t know many people. I have been a part of Hawai’i Club, but especially as a freshman, I made an effort to meet new people from different places.” She offers advice to other students like her (about 20 percent of Creighton students come from at least 1000 miles away!): “Don’t forget your first home; I miss mine, too, especially in winter, but make this place your second home. Meet new people and get involved; you’ll feel more connected to your experiences here. I did, and, believe it or not, I’ve never once been homesick.”

She has also found that the Jesuit, Catholic mission at Creighton has reinforced her spirituality while broadening her perspective. “I am a Christian, but I have met and formed solid friendships with people from other walks of life. I have gained a deeper appreciation for other worldviews.”

In high school, she admits, she was always “the good kid” (Hermione, remember?). And she still is, though clearly that does not mean taking the easiest, safest route to her goals. Rather, it means “I want to make the most of my time here and make it worth remembering—that includes everything I’ve accomplished, and the sweet—and the sour—times I have had.”