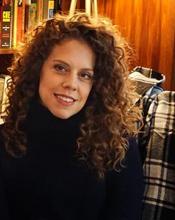 Jen Lambert has her go-tos when it comes to poetry — the true, beautiful, sweeping words of the canonical, or even not-so-canonical, experts in meter and feeling are always near at hand.

That’s a solace to the 1998 Creighton University graduate, poet and co-founder of the literary journal burntdistrict and Spark Wheel Press, publishers of contemporary poetry, especially after a taxing day combing through the sometimes hundreds of submissions the journal receives for its biannual editions.

Jen Lambert has her go-tos when it comes to poetry — the true, beautiful, sweeping words of the canonical, or even not-so-canonical, experts in meter and feeling are always near at hand.

That’s a solace to the 1998 Creighton University graduate, poet and co-founder of the literary journal burntdistrict and Spark Wheel Press, publishers of contemporary poetry, especially after a taxing day combing through the sometimes hundreds of submissions the journal receives for its biannual editions.

“I have my old favorites,” said Lambert who, with Liz Kay, founded burntdistrict in 2011 and has dedicated the magazine as a platform for poets known and unknown. “They’re those poems that remind you that sometimes, you have to wade through a lot before you encounter one or two that hit you in the stomach and you say, ‘That’s it.’”

Lately, however, Lambert said she’s been fortunate to leave the standbys on their shelf. While the journal’s move to an all-online platform earlier this year was completed with an eye to broadening reader accessibility and keeping publishing and distribution costs in check, Lambert said it’s also made more poetry easily and readily available from new and veteran voices alike. Moreover, Spark Wheel published its fourth book in the spring.

“I’m lucky enough to be surrounded by a lot of excellent writers, poets and artists who can do that,” she said. “That’s what keeps me constantly inspired. That’s why Liz and I started this. There are so many great poets out there who we know need to be heard and read, and there are the established poets, people you admire, who will send you their work and you’re re-inspired that they would take the time to share with you.”

Lambert and Kay started burntdistrict — named for a 19th century quarter of Omaha infamous for its dens of iniquity and vice — after completing Master of Fine Arts degrees in creative writing at the University of Nebraska-Lincoln.

Wanting to keep a foot firmly planted in the community of writers they’d entered as graduate students, the journal route seemed the perfect way to remain active in the conversation and also offer a sounding board for fellow poets.

The first seven editions of the magazine were published in paper form with an online compliment. But after the all-online issue went live, the publishers saw a marked uptick in readership.

“We suddenly had a much broader reach,” Lambert said. “It makes sense, because poetry requires us to be self-promoters, and social media has allowed us a platform for that. One of the first thing many poets do when we get published is broadcast it online. It’s such a great tool for exposure and for sharing poetry. With that first online edition, we had thousands of readers almost immediately.”

Most recently, Lambert and Kay joined up with the Nebraska Writers Collective and launched a new imprint, Burnt Books. While burntdistrict and Spark Wheel have had a national scope, Burnt Books, Lambert said, will concentrate on writers and artists working in Omaha and Nebraska. The imprint’s first offering is a book of art and writing from Omaha-based artist Bill Hoover.

Meanwhile, Lambert works day jobs teaching at the University of Nebraska at Omaha and mentoring with the Seven Doctors Writing Project, and continued refining her own book of poems she hopes to release soon. burntdistrict took a short hiatus but continued to accept submissions for its all-online issue and Lambert said though toil in the poetic vein is not always lucrative, it’s rewarding and more than worth the effort.

“It is hard,” she said with a laugh. “There’s so much that goes into it that you don’t really think of when you first decide to do something like this. But there’s no question we want to keep it going. It’s huge for us as not only writers, but lovers of the art. We get so much out of it and we hope that we are providing a place where poets can be heard. There is such great work out there and we want to help poets share it with the world. I truly believe that what we’re doing is making a difference.”

—
Creighton University is a Jesuit, Catholic university bridging health, law, business and the arts and sciences for a more just world.