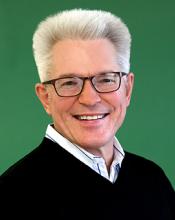 Greg Zacharias, PhD, professor of English, is a leading scholar of Henry James and was named 2014 Nebraska Professor of the Year.

Greg Zacharias, PhD, professor of English, has always been a champion of undergraduate research and a valued collaborative innovator at Creighton.

In 1996, he founded the Center for Henry James Studies at the University and has been the lead editor of The Complete Letters of Henry James, a series documenting the roughly 10,500 known letters the American expatriate author wrote during his lifetime. The eighth volume in the series was published in fall of 2014 and in early 2015, received the Modern Language Association of America certification of the MLA’s “Approved Edition” status.

The use of digital technology to transcribe and preserve the letters and other Jamesiana has been described as a cutting-edge melding of the humanities and technology.

“Dr. Zacharias is a true pioneer in the promotion of undergraduate research, and his work in training students in the art and science of documentary editing allows Creighton students a rare kind of scholarly training, one that is certainly unique in a school of our size,” said Bridget M. Keegan, Ph.D., interim dean of the College of Arts and Sciences.

In recognition of his achievements, he was named the Carnegie Foundation for the Advancement of Teaching and the Council for Advancement and Support of Education 2014 Nebraska Professor of the Year.

Most recently, Zacharias has forged a partnership in digital humanities efforts between Creighton and The Pennsylvania State University. Together, the two institutions will use the James letters to create an online Henry James Archive and to promote collaboration between both universities and James scholars and students.

Zacharias says he sees his main task in teaching as fostering an environment of openness. He bases his classroom model around that of the American literary critic Kenneth Burke, who created a metaphor of literary study as a great conversation where everyone is invited to participate - the “parlor.”

“What I think students discover in the parlor is their ability to relate to one another, to develop a sense of human relations and, in English studies, what we’re doing here, they become comfortable in their own skin,” Zacharias said. “They begin to find themselves in this place, and through this nurturing of human life and interaction in a space of great hospitality and encouragement.”