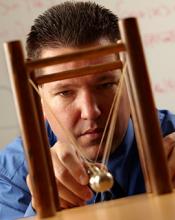 Gintaras Duda, PhD, is an associate professor of physics and was named a “Professor of the Year” by both the Carnegie Foundation for the Advancement of Teaching and the Council for Advancement and Support of Education (CASE).

Outside of being a teaching assistant, Creighton University College of Arts and Sciences is the only place he’s ever taught.

“I knew the minute I arrived that it was the type of school I wanted: perfect size, strong in the sciences, Catholic and Jesuit.”

Duda, who started teaching at Creighton in 2003, was one of four instructors across the country to be named a National Professor of the Year in 2013. He was selected from among 350 candidates in the master’s category.

The secret to his success: combining active learning techniques and technology to maximize student learning.

“Most people need some social interaction to learn,” he said. “So contrary to what we may have learned as kids, it can be a good thing to visit with your neighbor in class.”

He uses “clicker” technology in class to instantly poll his students’ understanding of material. He also incorporates Project/Problem-Based Learning (PBL), experimenting with problems that mimic real world—or “otherworld”—situations. One example: the zombie project.

In an upper-division mathematical physics course, Duda constructed a group project that modeled a zombie outbreak of the type seen on a popular television show. Students researched, devised and solved mathematical models for the spread of a zombie-like infection.

He also pioneered a team-teaching approach at Creighton, pairing a physics class with a calculus class, and interweaving the two in a way that reinforced each discipline.

His methods appear to be effective. His students receive high marks on departmental assessment exams—and his student satisfaction scores are among the highest in the College of Arts and Sciences.

Because he believes a lifelong interest in science may be best sparked at the middle-school level, he also conducts after school science clubs for students and workshops for public school science teachers.

“If you don’t do well in math and science, many doors close to you,” he maintains. “We need to determine which teaching methods students respond to and pursue innovative methods that will lead them to dive into the material with enthusiasm.”

His own research centers on dark matter, which he explores through computer-based calculations as well as pencil-and-paper theory.