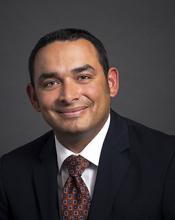 For generations, tradition in the family of Eric Mooss, BS’02, dictated that the eldest son would become a physician. In fact, the name Mooss translates in Malayalam to “physician of the king” in Kerala, India, where the family’s forebears were called upon to serve and provide their communities with medical care. Eric’s father, Aryan Mooss, MD, is a professor of cardiology in the Creighton School of Medicine.

The younger Mooss intended to follow that family legacy and enrolled in the pre-medical program at Creighton.

In his sophomore year, however, he had an epiphany.

“I realized I didn’t have a passion for biology and organic chemistry,” said Mooss. “I remember that day so well. I hit a wall, and threw my organic chemistry book down a flight of stairs in McGloin Residence Hall.”

That pivotal moment was life-changing for Mooss. Retreating to his dorm room after the ceremonial book tossing, he discovered the Health Administration and Policy (HAP) Program in the Creighton bulletin. The program resonated with him, and he decided to take an introductory class.

“I never heard of that career, even though I grew up in a family of medicine,” said Mooss. “I certainly had no idea it was a major. After my first class, I knew this was it for me.”

Mooss wasn’t out of the woods yet. He still had to have a much-anticipated conversation with his father, who holds the August H. Bergman, MD, Endowed Chair in Cardiology at Creighton’s Cardiac Center.

“I remember the time I told my dad, I was sitting on the living room couch and somehow mustered up the courage to tell him I wasn’t going to continue pre-med,” Mooss said. “He was upset at first, but he has definitely come around.”

After all, the elder Mooss’ son did pursue a path within the medical community, albeit not as a physician. And that path has led to great success. Eric Mooss now serves as president of the Bryan Physician Network in Lincoln, Neb., which offers primary care, specialty care and urgent care services throughout the metropolitan area.

“Eric made smart and precise decisions as an undergraduate in the HAP program,” said Susan Walsh, director of the Health Administration and Policy Program. “He learned how to network early on, even in his undergraduate years. On top of being mission-driven, and an excellent student, he was able to communicate with others and make professional connections that have helped him grow in his career.”

Mooss has continued to make strides in his professional life and contribute to the health care industry. He has served on the boards of the Heartland Chapter of the American Red Cross, United Way of Lincoln and Lancaster County and the Nebraska Foundation for Visually Impaired Children. Honors include the American College of Healthcare Executives (ACHE) Early Career Excellence Award, presented by the ACHE Regent for Nebraska to one outstanding early careerist.

He has also remained firmly connected to his alma mater.

“Here’s an alumnus who continues to give back to the University,” said Walsh. “Eric has been a mentor to many students within the Health Administration and Policy Program, teaching them about the importance of networking, career development, and pursuing positions in the nonclinical fields of health care that do not require a degree in medicine.”

“The most formative years of my life were at Creighton,” said Mooss. “I met my wife there (Rebecca Wells, BSW’02) and I strengthened my faith, appreciation of social justice, and the desire to serve people.”

The Creighton undergraduate HAP program enables graduates to promote health care organizations that are just and that put patients first. It is designed to provide students with the opportunity to build a solid understanding of health care institutions, management processes, public policy and social and ethical issues. The program offers sufficient flexibility for students to customize their plans of study, including internships, to enhance their career preparation.