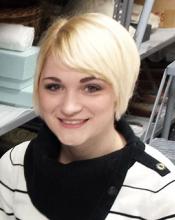 Something about this boy didn’t look quite right to Ashley Weed. The too perfect lines, creases covered over, not inexpertly, but definitely still obvious on closer inspection. He was much younger than the two millennia he said he was.

Thus began Weed’s interdisciplinary Roman odyssey in the antiquary at Omaha’s Joslyn Art Museum, where she and two other Creighton University undergraduates and their professor, Gregory Bucher, Ph.D., are examining fragments and full pieces of artifacts from early Imperial Rome.

This one was ostensibly a portrait statue — a head and shoulders — of a Roman boy, somewhere between 6 to 8 years of age. “But we saw that the head was not an ancient stone,” said Weed, a sophomore from Bellevue majoring in psychology and Classical languages. “Too shiny. Something that could not have been fabricated in ancient times. Cracks in putty that were binding different pieces together. There were just too many things that pointed to this being a pastiche.”

A pastiche piece would have been put together from disparate parts several centuries after original pieces were hewn from marble and other stone. Weed and her team surmised this one had probably been manufactured for sale on the art market in Germany in the early to mid-20th century.

Grandson of an Emperor?

Later the team chose another piece for study, part of a large collection donated to the museum. This one was just the face of a toddler, a rarity in the annals of Roman statuary, as Weed explained, using her own research into language, literature and culture of the day — the Julio-Claudian Era of the 1st century A.D.

The sculpture subject’s youth also left little to impart in the way of this boy’s importance. “For adults, you’ll have cues in the piece,” Weed said. “If you had a grave demeanor and wrinkles, it was an indication you had worked hard for the Republic. There were certain codes of masculinity that could be read into that. With a child, though, with chubby cheeks and smooth skin, it’s harder to figure.”

Just having a sculpture of a child was unusual at the time. Survival rates for infants were not favorable, and even if this was a funerary piece, it was an awful lot to spend. If someone had this boy sculpted, there had to have been a reason.

“There are just a handful of known children under the age of 3 who were sculpted,” Weed said. “So we start to think, yes, this could be a slave boy who was well loved, but that seemed like a stretch as far as an attachment.”

Without a great deal of research to go on, the students started making their own inferences. What started to enter into the students’ postulations was the possibility that they were dealing with royal blood. The face, Weed said, resembled similar sculptures she and her colleagues had seen of Tiberius Gemellus, the grandson of the Emperor Tiberius, Rome’s supreme leader during the lifetime of Jesus Christ.

“In the Julio-Claudian period, there’s an emphasis on youth and a hearkening back to the Golden Age in Greece,” Weed said. “We’d seen other portraits of Tiberius’ grandson and this one just started to look a lot like that to us. The literature, the style, it just seems to match.”

Weed and her fellow students presented a talk at the CU @ Joslyn series earlier this year and are also readying more information to hopefully unveil the piece for public viewing early next year.

“I’m excited to share what we’ve learned and show this sculpture off for the public,” Weed said. “It’s definitely opened my eyes to the different areas I can pursue in the Classics, which is what I want to pursue in graduate school. I have a lot of passions and I feel fortunate to go to a university that fosters my passions.”