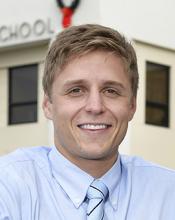 Anthony Edholm, a biology graduate from Andover, Minn., says Creighton University provided him with experiences – inside and outside the classroom – that have encouraged and aided him as he pursues the dream of a medical career.

It hasn’t been easy. In fact, Edholm transferred after his freshman year. “It was my first time away from home,” he says. “It was difficult.” But he missed Creighton, the students and faculty he had come to know, and returned with renewed vigor.

Upon returning to Creighton, he got involved. He joined the Premed Society, the Ski and Snowboard Club and Creighton’s Magis Ambassadors leadership group. He organized service efforts for the Premed Society – collecting groceries for the homeless and initiating a Halloween party for disadvantaged children. “It was really cool stuff,” Edholm says. His senior year, he was named president of the Premed Society. “That challenged me to rise up and take on a leadership role.”

Edholm says he has been blessed. And the threads of his Creighton experience weave an interesting interconnected tapestry.

Getting Hands-on with Research and an Internship

That led to meeting with Kristen Drescher, Ph.D., a faculty member in medical microbiology and immunology, who was collaborating with Lynch on research on leukemia and Lynch syndrome cancers. She recommended that Edholm apply for Creighton’s Ferlic Summer Research Program, which provides support for scientific research by undergraduate students, through the Center for Undergraduate Research and Scholarship. Edholm was accepted as a Ferlic scholar, and would work in Drescher’s lab.

Like many Creighton students, Edholm also participated in an internship, working with the American Cancer Society. “It was an unbelievable experience,” Edholm says. “I had an opportunity to interact with patients, and it solidified my desire to become a physician.”

Upon graduation, however, Edholm would pursue other opportunities. He was invited to participate in Teach for America, after a representative had heard him talk at a Premed Society event. The son of two career teachers, Edholm decided to postpone medical school to serve as a teacher at an inner-city high school in Los Angeles. “It was a big culture shock for me,” Edholm says. “But it was also one of the best experiences in my life.”

He has worked at two L.A. high schools and served a summer as an education coordinator for Envision National Youth Leadership Forum, which provides programming on university campuses for high school students interested in medicine and other professions.

On to an Overseas Adventure

Now, he’s ready to continue to pursue his dream of a medical career. He has been accepted to the University of Queensland in Brisbane, Australia, which he credits to his varied experiences. “And all of these opportunities came about through my time at Creighton. It changed my life.”