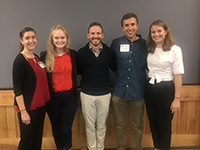 The INBRE project is designed to enhance the competitiveness of biomedical research in Nebraska. Creighton has been part of the Nebraska INBRE grant for 16 years. The current five-year grant is an $18 million NIH grant to support the INBRE program aimed at increasing undergraduate research experiences and producing more scientists in the state.