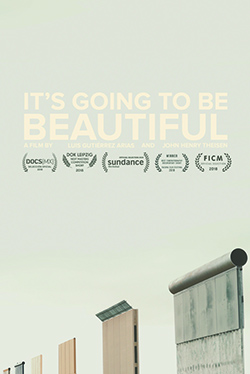 Omaha native John Henry Theisen, a 2017 graduate who majored in journalism and minored in English, recently premiered his co-directed short film “It’s Going to Be Beautiful” at the 2019 Sundance Film Festival in the category “Documentary Short Films.” It also played at the 2019 Omaha Film Festival earlier this month. Watch a trailer here.

Theisen’s film looks at border patrol and military work in testing the eight prototypes for a projected border wall between the U.S. and Mexico. Theisen first became interested in journalism as a student at Creighton, and this film deliberately has its roots in journalistic reporting. He and his co-director and co-screenwriter, Luis Gutierrez Arias, both have journalistic backgrounds and wanted to start a project that had real-world affect and was relevant.

“When we found the wall prototypes, we decided to take a trip down to the border because they were such strange and fascinating objects,” Theisen said. “We didn’t really have a plan other than to document the walls in some way. We reached out to the border patrol and interviewed some of the agents. We then spent time in Tijuana, Mexico, filming the immediate area from the Mexico side.”

Theisen continued, “Our goal was to have different sides of the story evident but still remain political. There is some extreme miscommunication about the situation from the U.S. side, especially in California which is really all I can speak to. There are already two walls in some places.”

Theisen is grateful that the film was chosen for the 2019 Sundance Film Festival. “There were great short documentaries in our category and it’s amazing to have been counted among them. I think there were 18 films in the short documentary film category, and many of those were centered on current political realities similar to our film.”

Because they were able to capture quite a bit of footage on their trip to the border, Theisen and Arias plan on making more films with similar content.

Kansas City, Kansas native Sophie Snider, a 2018 graduate who majored in graphic design and English, premiered her short, animated film “The Light of Homelessness” at the 2019 Omaha Film Festival. 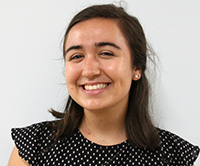 She wrote a final paper that semester for an English class taught by Joshua Prenosil, PhD, who later encouraged her to look into a CURAS grant to research the topic further. She applied for the grant and wanted to use her qualitative research skills from her English major and creative filmmaking skills from her graphic design major on the project. She was thrilled to receive the grant.

“I believed CURAS typically gives grants to students with projects in the health science fields, so even applying for the grant felt risky to me,” said Snider. “I am thankful that Creighton gave me the opportunity to further pave the way for humanities research.” She said Creighton’s Jesuit values and dedication to meaningful research opened the doors for her to further explore the topics of homelessness.

As Snider researched the issue in Omaha, she learned how people communicate about homelessness and how that can perpetuate the negative stigmas regarding people who find themselves in that situation.

“The word ‘home’ really propelled my interest in the issue,” Snider said. “’Home’ means a lot more than consistent housing or employment. I want people to see the humanity that transcends the underlying issues that propel unstable housing.”

As for the attention her film received, Snider is in awe.

“I am honestly still processing this recognition because I had a lot of self-doubt throughout the project. It definitely makes the copious hours I spent transcribing interviews and creating stop-motion animations worthwhile. But beyond me, the attention brings light to the issue of homelessness in Omaha and I hope that it encourages people look at their own biases surrounding this issue.”