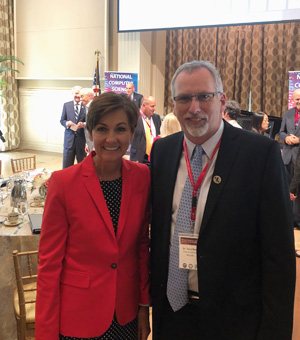 Hosted by Arkansas Gov. Asa Hutchinson, the event brought together governors, legislators and educators for two days of keynotes and discussions. The summit’s purpose: to find the right path forward for K-12 computer science education in America.

Over the past 25 years, Reed — also the director of Computer Science and Informatics for the Department of Journalism, Media and Computing — has developed a singular expertise in this area.

At the summit, he took part in a panel on post-secondary education and workforce issues. He also led a breakout discussion on such topics. (See a video of Reed’s panel.)

“It was a memorable experience,” Reed says. “And I appreciate Creighton and the Haddix Fund for supporting my attendance.”

Reed is referring to the Susan and George Haddix Fund for the College of Arts and Sciences, which supports a variety of initiatives, including funds for faculty research and travel, as well as renovation, research grants and mentorship programs.

The fund was established in 2017 with a $10 million gift from the Creighton alumnus and his wife. It’s the largest gift to academic programs in the College of Arts and Sciences’ history. George Haddix, MA’66, PhD, taught math at the University before shifting to a career in business. 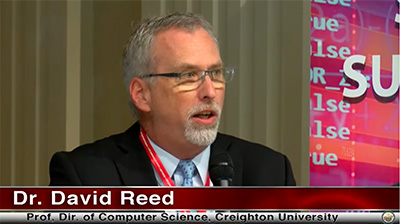 It’s opportunities such as Reed’s that the Haddix travel funds were designed for — a way to support and enhance Creighton faculty while extending the University’s reach in the wider world of academics.

Reed says he’s thrilled he got to go to the summit and grateful that the Haddix fund gave him the chance, as K-12 computer science education remains an evergreen and essential issue in American schools, and he wants to be a part of the conversation.

Reed attended the summit with about 150 others, including governors, legislators, educators, superintendents and advocates, representing 35 states and Canada. Reed was the only Nebraska representative.

Reed even got to speak with a former President. The evening before the summit, he and others attended a reception at the William J. Clinton Presidential Library and Museum, where President Clinton himself made an appearance.

“He spoke with us in very personal terms about the importance of computer science education, and stayed to meet and talk with us,” Reed says. “I was fortunate to get to shake hands and talk with him briefly.” 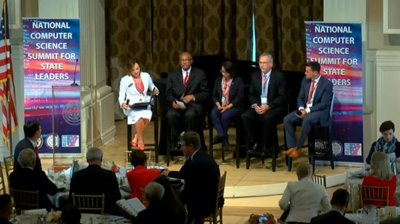 Computer science education is something Reed will never tire of taking about (with Presidents or anyone else).

Computer science distinguishes itself from other areas in education both in its expense of resources and the rapidly evolving nature of its curriculum.

“The issue offers really interesting challenges,” he says. “For one, it’s very difficult to make policy changes in the K-12 system in the U.S. because things are so decentralized.”

Decisions are made at the state and district levels. You can convince a governor of the need for more robust computer science curriculum, Reed says. But individual school districts will still need to commit the resources and find the qualified computer science teachers to execute that curriculum.

“Nebraska is on the right path,” he says. “There certainly is still work to be done. But we have people who are working on it and doing the right things.”