Chelsey Hill, BFA’14, sees the world like an alien would. All good illustrators do, she says. 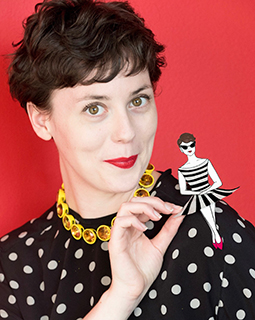 “We pick up the funny things that people don’t notice,” says Hill, an Omaha native and Creighton University graduate who has spent the last five years living and working as a professional illustrator in New York City.

Hill’s work has appeared in several publications, including the New York lifestyle magazine W42ST, online French fashion magazine Grace in Paris and in materials for Broadway ticket company Broadway Roulette. A cover she drew for W42ST was recently voted the magazine’s most popular ever.

Her passion for the visual arts is rooted in Hill’s love of performance. At Creighton, she double majored in music and musical theater. As part of her work-study program, she worked in the costume shop for the Department of Fine and Performing Arts under former Creighton costume designer Lindsay Pape. (Pape is now the costume designer for the Omaha Community Playhouse).

Near the end of her senior year, Hill took a class in costume design with Pape. 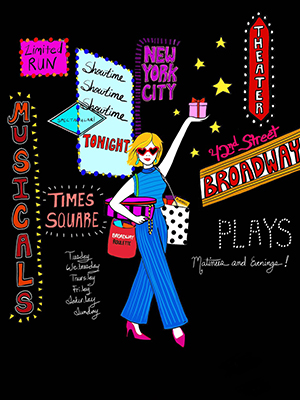 “That kind of sparked something in me,” Hill says. “Instantaneously I loved it so much. I would spend hours on these renderings. I’ve never had a class inspire me as much as costume design. I was kind of kicking myself, like ‘Why didn’t I take this sooner?’”

Also her senior year, Hill starred as Christine Daaé in the Creighton Theatre Department’s production of the musical Phantom and met playwright Arthur Kopit during the his visit to campus. After graduation, Hill moved to New York City, landing auditions for Broadway shows through her connection with Kopit.

In the meantime, she kept drawing, posting her artwork to social media. She began to develop a following and, eventually, people and organizations began offering to pay her for illustrations.

Hill describes her style – both personal and artistic – as “a cross between Chanel and a clown. It’s classy and trashy. It plays with juxtaposition.” She especially loves drawing quirky characters who wear their eccentricities – quite literally – on their sleeves. For instance, a specific type of elderly woman she often sees walking around New York. 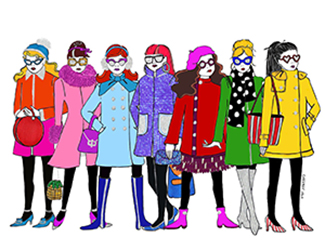 “Those stylish Upper East Side grandmothers who look really great, but you know that 45-year-old fur coat hasn’t been cleaned in years,” she says. “Costumes tell a story for me. It’s the ultimate character visual. You know so much about someone by what they wear. It’s married all my art forms.”

She finds inspiration everywhere. In museums. On sidewalks. In art, music and performance. She people watches, seeking the odd detail or flourish buried in the everyday. For new artists, she says, attention is critical.

“Expose yourself to things,” she says. “Be present in the moment. Don’t be buried in your phone, because you can find things in any situation. Be curious … Let that curiosity fuel your work.”

Learn more about the degrees, majors and minors offered through the Creighton University College of Arts and Sciences.