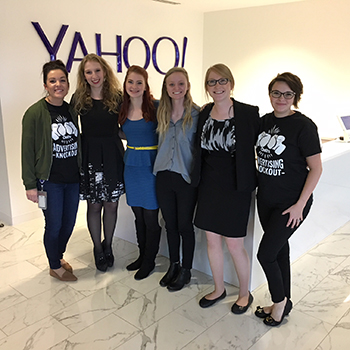 Oath Inc. is a subsidiary of Verizon, and serves as the umbrella company of its digital content subdivisions, including media powerhouses such as Yahoo, Huffington Post, Tumblr and AOL.

Participants were challenged to grow the millennial audience across the Yahoo Finance brand while increasing overall Yahoo finance app downloads. They also had to leverage at least one other non-finance related Oath brand as part of their solution, and stay within a $2 million budget.

After coming up with a plan of action, each team had to pitch its idea to a panel of judges consisting of Oath employees and faculty from each participating university.

Creighton students were members of both the first- and second-place winning teams.

For Junior Michael Lyons, the Advertising Knockout was an exciting way to apply marketing skills outside of the classroom. “It was great to experience being in a professional environment for a company as big as Oath. I’ve never done a challenge like this, so it was fun being able to put my knowledge and skills to the test against other students.”

Each team also had the opportunity to brainstorm ideas with several Oath employees to gain professional insights before their final pitch.

Senior Hannah Wilson said she and her teammates wanted to focus their presentation on how millennials could prepare for the future. “We wanted to get at the fact that the future is valuable, and that the decisions you make now on where money is spent are just as valuable. That brought us to our slogan – ‘The Value of Now.”’

Wilson’s team finished in first place, and her team’s pitch advised the use of an interactive game aimed at increasing downloads of the Yahoo Finance app among millennials.

Along with gaining real-world creative experience, participants also made new friends. “I didn’t know two of the girls on my team until the first day, but we really bonded and worked well together. I learned so much, and am so thankful for this opportunity,” Wilson said.