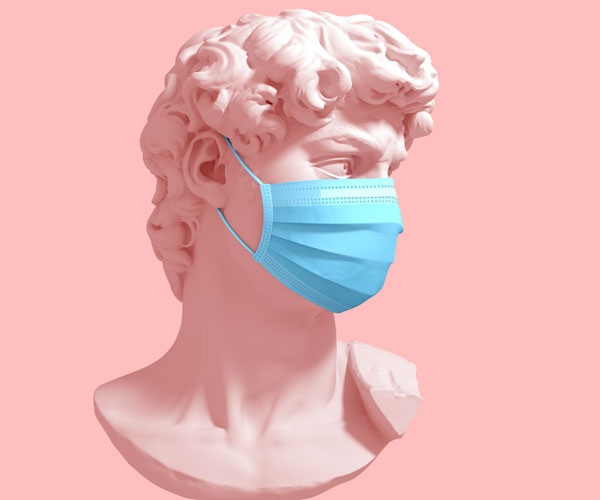 The pandemic began in the East, sweeping through cities and towns, disrupting daily life and sowing fear and uncertainty throughout much of the known world.

It was the second century CE. And the Antonine Plague, as it came to be called, weighed heavily on the mind of the Roman Emperor Marcus Aurelius.

Today, Marcus is remembered as a philosopher-king who left behind a series of writings to himself aimed at improving his moral character. That work, known as Meditations, is now regarded as one of the central texts of the ancient Greek philosophy of Stoicism.

As it did for Marcus, Stoicism can offer peace of mind today as the world struggles with the current COVID-19 pandemic, says William Stephens, PhD, professor of philosophy in Creighton’s College of Arts and Sciences.

“It’s often the case that people who don’t understand Stoicism very well think that Stoicism is really just a philosophy for dark times. A philosophy for crises, when things are going badly, whether it’s wartime, or a pandemic, or the stock market crashing, or any number of so-called catastrophes,” Stephens says. “What the Stoics have taught us for a couple millennia now is that crises happen. And a crisis is simply what you judge to be an unexpected very bad thing.”

Far from being a philosophy only for a world in turmoil, Stephens says, Stoicism is for the everyday. At its core, it aims to help individuals cultivate a strong moral character and clear-headedness, qualities which happen to prove invaluable during times of crisis, says Stephens, who has written several books on Stoicism, including Stoic Ethics: Epictetus and Happiness as Freedom (2007), and Marcus Aurelius: A Guide for the Perplexed (2012), and is currently on sabbatical completing other writing projects.

Fundamentally, Stoics believe in understanding the difference between what is within your power and what isn’t. You had no control, for example, over when and where you were born or the family you were born into. Similarly, you cannot prevent bad weather, natural disasters, an economic downturn or the mass outbreak of disease.

The Stoics instead turn their attention inward and devote their energies to what is within their power, including living according to reason, Stephens says. This means accepting that externals, such as poverty, sickness and even death are conditions ultimately beyond one’s control and are neither good nor bad. The Stoics hold that the only true goods in the world — the only things that can guarantee a peaceful, happy life — are four key virtues: wisdom, justice, courage and self-control.

“Being a good person is what matters,” Stephens says. “Stoics fundamentally try to root out the pathological states of fear, anger, greed, and lust as diseases of the mind. They recognize that cultivating our moral character is something that’s up to us. No one can stop us from becoming more courageous or trying to live justly or helping other people. No one can stop us from committing ourselves to living virtuously.”

Those who do commit, Stephens says, will find themselves more clear-headed and emotionally prepared when crises arise. Because of this, they will be better equipped to act — to take practical steps to improve the situation for themselves and for their neighbors.

Take Marcus Aurelius as an example, Stephens says. As the most powerful man in the Roman empire, Marcus was tasked with stimulating an economy decimated by plague. He did so partially by selling his own family’s jewelry, furniture and expensive possessions — requiring other wealthy Romans to do the same — and pouring that money into the public treasury.

“Stoicism trains you to deal with whatever happens by using the virtues that you’ve cultivated over many years. You train yourself not to be surprised, to be ready,” Stephens says. “What rattles people now is, we forget that we have a long history of battling epidemics. Diseases are not new. We’re going to get through COVID-19. With Stoicism, we can begin to think about how we’ll handle ourselves both now and on the road ahead.”