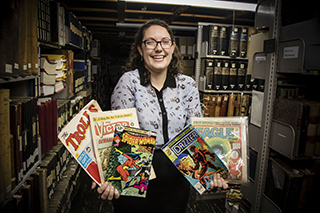 Creighton alumna Hailey Austin, BA’16, has penned herself a page in international comic book history as she becomes the first American to write for the United Kingdom’s legendary Commando comic.

Austin is currently a 24-year-old PhD student at the University of Dundee in Scotland, where she previously completed a Masters in Comics and Graphic Novels.

She moved to Scotland with no experience of writing comics, but has made her international mark in the comic book scene after writing Steel Inferno, a fictionalized version of a true World War II story of bravery and sacrifice. 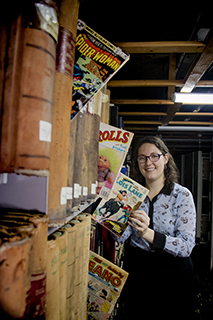 Inspired by the daring efforts of a train crew that saved a Cambridgeshire town from an ammunition train that caught fire, Austin was determined to share the story in the popular war comic.

“I came across the rail disaster and was struck by the incredible bravery of those who sacrificed themselves to prevent an even greater tragedy,” Austin says. “With 44 carriages packed full of ammunition, the damage and loss of life would have been colossal if they had not got the wagon on fire as far away as they could.

“No one really knows how the fire broke out, but for my story I thought ‘what if it wasn’t accidental?’ and had a Nazi spy sabotaging an ammunition delivery only to be foiled by these men.

“Luckily the editorial team at Commando loved it, and I’m very excited to see it published. I didn’t have any experience of writing comics before I came to Dundee, but I have learned so much in my time here. I love doing it and want to do a lot more of it in the future.”

Austin has already established herself in the vanguard of female comic creators. She is one of the first women in more than 30 years to write for one of Scotland’s longest-running titles and helped co-found the Dundee chapter of Laydeez Do Comics, an international organization championing women writers. 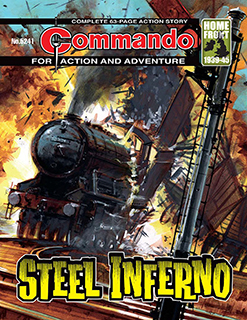 She will not have to wait long before her next publication day as Commando has picked up another of her stories. The next comic, which covers the women of the French Resistance, will be published to coincide with International Women’s Day next March.

Austin graduated from Creighton with a bachelor’s degree in 2016, double-majoring in English and Spanish with a minor in history. Her PhD research in comics attracted media attention last year after she discovered rare comics dating back to the 1800s in the University of Dundee’s archives.

The city of Dundee is a recognized powerhouse of comics production. It is home to DC Thomson, producers of iconic titles such as the Beano, Dandy, Commando, Starblazer and Bunty.