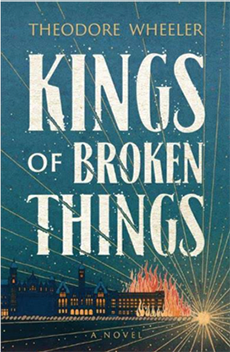 This summer, the College of Arts and Sciences encourages alumni to join us in reading Kings of Broken Things, by Theodore Wheeler, MA’08, MFA’15. Wheeler’s 2017 novel, published by Little A, tackles the violent events of the summer of 1919 in Omaha, which culminated in the lynching of Will Brown.

As Omaha prepares to observe the 100-year anniversary of one of the darkest seasons in its history, the story could not be timelier. Amidst postwar chaos, with yellow journalism and corrupt politicians stoking racist fears, an African-American man named Will Brown faced accusations of assaulting a young white woman. A mob stormed the courthouse in downtown Omaha, setting fire to the building where Brown was jailed, and dragged him out. They shot and hung him, and thousands of people joined the bloody procession that dragged his burned body through the streets. Mayor Ed Smith, who attempted to protect Brown from the lawless mob, was nearly killed as well. A few members of the mob were prosecuted, but those accused of Brown’s murder were found not guilty.

Wheeler faithfully captures the atmosphere of the era, which indeed saw unrest in many other American cities that summer as well, while weaving in compelling characters of his own. The novel has enjoyed a positive reception, with Kirkus Reviews calling it “vivid and dynamic” and Booklist promising that “readers will be drawn into Wheeler’s careful re-creation of a turbulent time.”

Look for more information on the Summer Read coming soon.