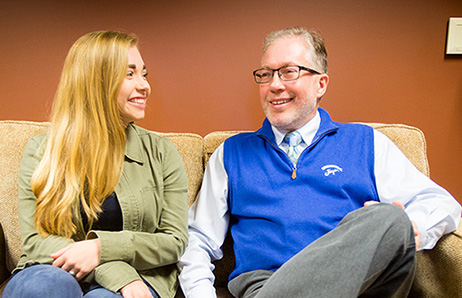 During their time together at Creighton University, they shared many moments – even time in the classroom and working on research. “I know [my dad] loves what he does,” Erin says. “Seeing his passion and compassion in action is the coolest thing.”

The psychological science department has long been a special place for Erin, with people who feel like family, she says. Likewise, Dr. Budesheim had no doubt that his academic home would be a good one for his daughter: “I know my colleagues are good teachers. This is a place where I knew Erin could thrive.”

When Erin first began applying to colleges, she was not interested in staying so close to home. Eventually, she says, “I realized [Creighton] was the best place for me to grow – it was the best decision.” She did want to follow her parents in their choice of major. Her mother also has a graduate degree in the field, and Erin recalls that conversations at the dinner table growing up often came back to psychology.

A couple of years into her studies, Erin discovered that her passion for mental health among college students dovetails with the direction of her dad’s research. He had been studying how people form judgments about others and themselves, and how they are affected as targets of those judgments. He has collaborated with several students on projects exploring various aspects of the stigma associated with having a mental health problem, which is where Erin’s interest comes in.

Dr. Budesheim connected with Alicia Klanecky, PhD, also an associate professor of psychological science, about a potential project on the psychology of being a target of mental health stigma. Dr. Klanecky was already a research mentor to Erin, and soon the three were working together.

The research team examined the relationship between seeking help for mental illness, different forms of mental health stigma, and how they may be associated with problem drinking behavior among some college students. They presented their results at the annual conference of the American Psychological Society, but they didn’t stop there. Now it’s time to apply their findings, and a college campus is just the place that could benefit from new approaches to mental health such as this.

Being Their Own Therapist

One way to help build resiliency is by helping students change their attribution patterns. “We know that how one explains adverse events is linked to depression. We are trying to intervene and have them change those patterns,” said Dr. Buddesheim. The difference between a poor exam score leading a student to believe “’I’m stupid’ versus ‘that test was really difficult,’ Erin explains, can make all the difference. Attributing the score to the latter allows students to focus their attention on how they can change their behavior, something they can control.

To give students the tools to cope, select peer leaders in the Ratio Studiorum Program, a course that all freshmen take, provide training designed to help their peers develop resilience. Students will learn to “be their own therapist in some way,” Erin says.

Erin is on her way to becoming a therapist herself. This fall, she started a doctoral program in counseling psychology at the University of Illinois – her father’s alma mater, no less.