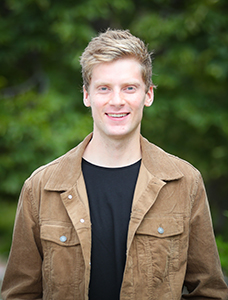 Out there, in the vast, cold infinity of space, hurtling around our solar system’s asteroid belt, captured for eons between the orbits of Mars and Jupiter, is a big chunk of metal that has no idea it is currently the object of song, story, dance and art right here on Earth.

16 Psyche, as the asteroid is known, is among the largest of hundreds of millions of chunks of metal and rock estimated to compose the circular asteroid belt within whose compass the planets of Mars, Earth, Venus and Mercury maintain their existence.

Creighton University sophomore Noah Keime, who is majoring in biology and studio art, is among 16 student interns across the nation chosen by NASA to give artistic expression to the space agency’s planned exploration of the asteroid.

NASA plans to launch an investigatory spacecraft in 2022, arriving at 16 Psyche in 2026 and then orbiting the asteroid for 20 months while studying all aspects of its composition and topography. The asteroid is among the 10 largest in the asteroid belt, has a diameter of about 120 miles and is suspected to be either the iron-nickel core or a fragment of the iron-nickel core of a protoplanet, which might cast light on the nature of the Earth’s own core, which is also believed to be composed of iron and nickel.

It’s a big deal mission, and NASA has asked the nation’s top student talent to give it artistic expression.

“We are each responsible for coming up with four creative pieces throughout the course of the year.” Keime says. “We’re supposed to create these works in the interest of promoting the Psyche mission and showing it to the public in a less traditional way.

“I do drawing and illustration, which is more typically what you would think of with art, but the other interns are doing all sorts of other things.

Keime says Meghan Freeman, a program planner with Creighton’s Center for Undergraduate Research and Scholarship, knew of his interest in the intersection of art and science and suggested he apply.

Which he did, and after submitting three sample works and several essays about his interest in the 16 Psyche mission, Keime was selected as one of 16 interns nationally.

A native of Dakota Dunes, South Dakota, Keime says he has until approximately the end of October to submit the first of his four contributions.

“This is a pretty unique opportunity, to be able to do something that is so much a marriage between art and science,” he says.