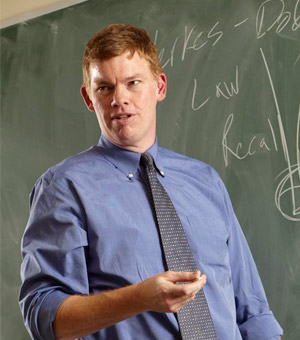 No one needs to be reminded that times are tough right now.

With an array of stresses brought on by the COVID-19 pandemic affecting millions worldwide, reports of depression, anxiety and other mental health conditions are soaring. But one Creighton University faculty member is involved in a national effort to address the problem among young adults of color by meeting them where they are: on social media.

Matthew Huss, PhD, chair of the Department of Psychological Science in Creighton’s College of Arts and Sciences, is one of several psychologists consulting on @socialthatsupports, a project that aims to promote mental wellness by partnering with social media influencers, celebrities and the American Psychology Association.

“Mental health has been negatively impacted by isolation and stress for many people, no matter what walk of life they come from,” Huss says. In following social distancing guidelines, “people are less likely to be able to reach out to friends and family members from whom they might otherwise get social support.”

With the pandemic cutting off people from traditional support structures — and an economic downturn causing increased financial stress for many — suicide rates are on the rise. In light of the recent Black Lives Matter protests that have sprung up in cities across the country, the project is hoping to offer support to young adults of color, mostly between the ages of 18 and 25.

The Social That Supports project is meant to normalize mental health issues such as depression and anxiety. It was founded by one of Huss’ former graduate school classmates, David Washington, who went on to start his own philanthropic consulting firm, P4P: Partnerships for Purpose, which helps high-profile individuals establish charitable foundations.

When Washington had the idea for a social media campaign aimed at mental health, he approached Huss and other psychologists to consult on the project. Huss and his colleagues have been offering guidance on what topics to address, as well as helping to provide reliable information and contacts with organization such as the American Psychological Association to Washington and his team.

For now, the project continues to evolve across social media platforms such as Instagram and Facebook as well as a central website. The idea, Huss says, is to partner with celebrities with broad reach to promote the account and the content posted on it. One initiative, Huss says, is to start the trend of Social Support Sundays, to make Sunday a day to promote mental and emotional wellbeing.

“We’re trying to basically get the information out there to people who aren’t sitting down to watch CNN or Fox or MSNBC, or read a newspaper,” Huss says. “These people are getting their information from people they follow online. So we’re trying to bring the expertise and legitimate information to them, trying to identify resources, trying to give them communities that are supportive. If (someone like) Katy Perry is saying it, that’s a lot different than a psychologist who’s an egghead saying it.”

Says Huss: “We’re also trying to identify some ways, whether it be turning to a mental health professional or something else like getting outside of the house and going for a walk,  to eliminate and reduce social isolation and get social support from others.”