On the island of Cyprus, tucked away near the eastern edge of the Mediterranean Sea, a Creighton University educator is guiding new generations of archaeologists as they unearth ancient treasures.

Erin Averett, PhD, associate professor of archaeology in the Department of Fine and Performing Arts at Creighton, serves as the assistant director of the Athienou Archaeological Project (AAP), an archaeological field school that explores the rich history of the Malloura Valley in central Cyprus, with a recent focus on excavating an ancient religious sanctuary. At the school, Averett and her colleagues teach undergraduate students the basics of archaeological survey and excavation, training them in the field as they uncover artifacts that illuminate the island’s long history.

“We work with undergraduate students rather than hired excavators, and it goes more slowly because our main mission is education rather than speed,” Averett says.

Run by director Michael Toumazou, PhD, at Davidson College in North Carolina, AAP has been active on Cyprus since 1990. Averett joined the project in 1997 and has been assistant director since 2003.

Excavation takes place in a fertile agricultural plain in the center of the island. The project selected this site, Averett says, because it was far removed from the coastal urban centers where scholars had traditionally focused much of their attention.

The main focus of the excavation for the past 15 years has been a large religious sanctuary that was in use from about 800 B.C. to 400-500 A.D. The sanctuary, Averett says, was an open-air enclosure where, for centuries, worshippers performed animal sacrifices and other rituals and left offerings to various gods and goddesses.

“Cyprus was much more international and cosmopolitan in terms of the people who lived there, and their religion tends to be an amalgam of Near Eastern, Egyptian and Greek traditions,” Averett says. “The main ritual for ancient Mediterranean religion was animal sacrifice. We’ve found the altar with the burnt animal bones on and around it. We’ve also excavated votives that depict the types of activities that happened in the sanctuary, the worshippers, and the deities venerated here. So archaeology really illuminates our image of the past.”

That said, the program also has much to teach students about the present, she says.

Today, Cyprus is split between the Republic of Cyprus in the south and northern territory occupied by Turkey (the Turkish Republic of Northern Cyprus, established after Turkey invaded the island in 1974, is not recognized as a country by the international community). AAP’s dig site is located in a United Nations buffer zone between the two areas, where signs of the region’s recent past abound.

“Our students learn just as much about recent history and contemporary Cyprus as they do about the past,” Averett says. “I think living in a village, where our project has extremely close and unique ties with the residents and town and where our students interact with Athienites, and excavating in a demilitarized zone really makes students aware that you can’t just separate the past from the present. We’re all kind of working together. And it’s a really cool experience seeing students realize that the past doesn’t exist in a vacuum; they need to learn about and be sensitive to the modern political situation on the island. And that’s something really special about our project.”

As a field school, the program accepts 10-18 undergraduate students each summer from colleges and universities nationwide. The students live in Cyprus for six weeks, gaining excavation and survey experience at the site, while also learning about the entire process of archaeology (from recording to processing to conservation at the lab). They also explore the history of Cyprus in lectures and weekly site tours all over the island. 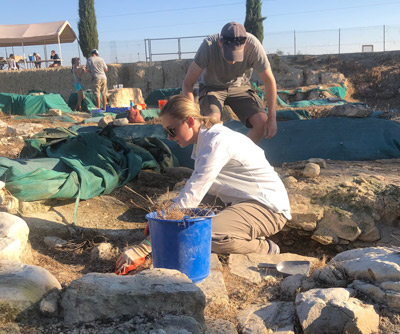 Students study the basics, such as how to walk around the site without damaging ancient walls or artifacts, while also mastering modern techniques, such as digital imaging and other new technologies.

Though the project is open to students nationally, several of Averett’s students at Creighton have been accepted over the years.

“It was the coolest thing ever. It’s honestly exactly what you see in movies,” says Grace Bryant, a junior art history and cultural anthropology major who spent last summer in Cyprus participating in AAP’s field school. “There was so much going on all the time, and it was really cool to actually see how archaeologists do things.”

On a typical day, Bryant and her teammates would wake up about 5 or 6 a.m. and head to the site and dig until about 2 p.m. Then, they would head to the lab to examine and document the artifacts they found, including pottery sherds, limestone statues, a metal arrowhead and, in one rare instance, small gold flakes.

Later, the group would attend lectures on archaeological methods and the history of Cyprus. In their spare time, Bryant says, the students had the opportunity to explore the island and meet local people.

“My biggest takeaway is, I definitely want to do this,” says Bryant, who hopes to attend graduate school and specialize in Egyptology. “It really hit me while we were there that most of what we know about human history is from archaeological records. It’s really important to keep doing this to teach future generations about history and our past. And it can also tell us a lot about ourselves.”