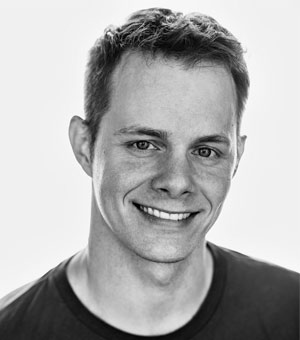 Bryan McClure, BA’06, thought it was a prank.

The summer before his senior year at Creighton University, the graphic design major received a call asking if he’d like to audition for a small role in a local commercial. A year previously, he had responded to an online ad with the enticing message “make money acting.”

He got the part. And caught the acting bug in the process.

“There’s just a cool energy being on set. There’s a creative energy that’s there,” McClure says. “I got paid to be there. I got paid to do this fun, creative thing. I told the agency that called that if anything else comes up, please let me know.”

More than a decade and stint in Hollywood later, the Atlanta-based McClure is still acting. He recently appeared in the second season of the Netflix series Mindhunter and can be seen in “Teddy Perkins,” an award-winning episode of the FX series Atlanta.

McClure also plays the lead in In Other Words, a romantic comedy featuring Saturday Night Live alumnus Chris Kattan. The movie will debut locally March 6 at the Omaha Film Festival.

A native of Council Bluffs, Iowa, McClure chose to attend Creighton after high school because his mother, Laurel McClure, was a longtime staff member at the University. He participated in a number of campus activities, joining a fraternity, the Creighton Students Union and playing several intramural sports. Perhaps surprisingly, he never appeared on stage at Creighton.

Through a University job fair, McClure secured an internship at the Archdiocese of Omaha, and after graduation, accepted a full-time web design position with the archdiocese. But after his first commercial, he increasingly pursued acting on the side. He began seeking local film work and taking classes with the Omaha Community Playhouse. He appeared as an extra in several locally made films, including Ulterior Motives (2008) and Lovely, Still (2008).

“I was still doing graphic design, but this interest started building in me,” McClure says. “I remember being on the set of Lovely Still, at the (Durham) Western Heritage Museum. It was snowing, and the tree was there, and I remember feeling the call in my heart that God was telling me to move to Los Angeles and pursue acting professionally.”

So he did. McClure and a few friends split an apartment, and McClure began making connections with other Nebraskans working in the entertainment field on the West Coast. His first major TV credit was an episode of Hawaii Five-0, which was filmed on location. During the trip, he stayed with a friend from Creighton and met up with other alumni for a night out in Honolulu.

McClure has since relocated to Atlanta, another major entertainment hub, but still travels to Los Angeles often for work. He plans to be in Omaha soon to attend the screening of one of his newest films, In Other Words, at the upcoming Omaha Film Festival.

In the movie, McClure stars as a tech entrepreneur who, in an effort to prove his dating app works, travels to Mexican wine country to meet a beautiful girl.

In addition to starring in the film, McClure also designed the poster. Throughout his career, he says, the design skills he learned at Creighton have served him well. When he’s not acting, he runs a graphic and web design business, which, he says, has given him the flexibility and security to pursue his passion.

“It’s been such a blessing to have those skills that allow me to work,” McClure says.

For showtimes and more information on the Omaha Film Festival, visit omahafilmfestival.org.