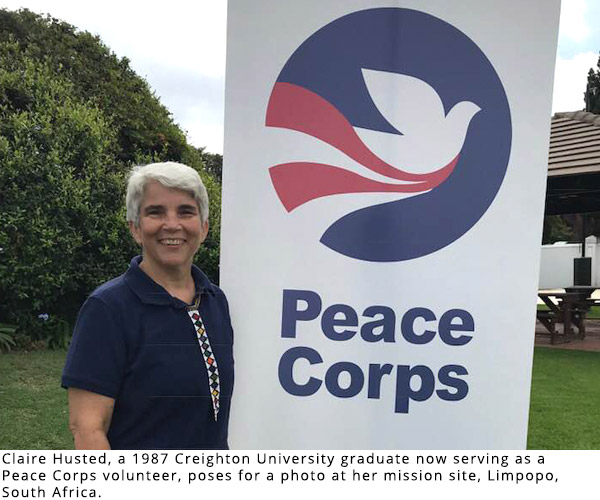 Rarely has an email been more welcome.

Claire Husted, BA’87, was used to seeking miracles, having lived as a Catholic nun for three years before heading to South Africa as a Peace Corps volunteer in 2018.

It had been almost a year since she applied to the program, and after arriving in Limpopo Province, she was eager to be of use. Limpopo is among South Africa’s poorest regions, with a population of almost 6 million and a largely rural lifestyle.

“A local chief noted the need for job skills so that youth could find jobs,” Husted says. “Through my own research, I learned that unemployment is over 50% among people under 35.”

Thus prepared, as part of her Peace Corps mission, she took stock of a struggling, 12-year-old computer skills program that offered not only hope for local youth seeking better employment opportunities but also proved a critical source of revenue for the nonprofit organization offering the training.

“They needed to update their more than 10-year-old computers and update their 2007 Microsoft Office,” Husted said. “My supervisor shared how the computer program really saved the organization financially when some other donors moved on to other organizations.

“I thought I could help them identify new funding sources.”

After two potential funders rejected the organization’s applications, Husted and her supervisor sent out a third, to a Catholic organization she says Peace Corps rules prevent her from naming. The application went out in October 2018 and by the time January rolled around no response had been received.

But in mid-February of 2019, Husted’s supervisor sent an email that a foreign deposit had landed in the program’s bank account, a deposit that enabled purchase of 30 refurbished computers, a Wi-Fi router with data sim card and Microsoft Office 2016.

An electrician and a furniture supplier were hired, and by May 15 the program welcomed 46 new students.

It was, Husted said, one of those special moments that populate the lives of Peace Corps volunteers. Another such moment occurred when the daughter-in-law of her host couple died, leaving their three grandchildren without a mother. That sadness coincided with news that a close friend of Husted’s, a colleague and former Peace Corps volunteer, had died at the age of 54.

“I was overcome and lost,” Husted said.

The funeral ceremonies for the deceased daughter-in-law, so culturally distinct from her American experience, provided a great measure of comfort. She was invited by several local women to sit and talk and pray.

“Through this whole experience I learned what community is,” she says. “I was able to grieve a very unexpected death of someone close to me while I was geographically far away.”