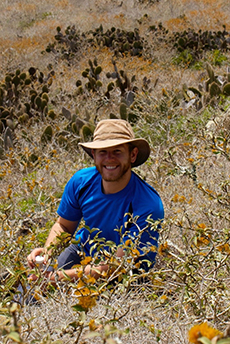 Andrew Kraemer, PhD, adjunct assistant professor in the Biology Department, has always been a collector at heart. He loves the vast diversity of morphology, the branch of biology that deals with the form of living organisms, and coloration among all organisms, especially in its evolutionary significance. He eventually gravitated toward studying evolutionary biology with a specific emphasis on traits arising from adaptive radiation.

He has continued to foster this interest in his most recent work with Christine Parent, PhD, his postdoctoral advisor-turned-collaborator, through their work in the Galápagos Islands. They recently published an article in Proceedings of the Royal Society B: Biological Sciences on newly discovered selective factors contributing to the coloration patterns of snails found throughout the archipelago. Most notably, they determined that on the youngest volcanic islands, predatory interaction was not the primary force affecting morphological evolution, but rather thermoregulation, or the ability of an organism to retain its body temperature.

As it turns out, on younger islands, where predators and prey have had less time to co-evolve, the major factor helping to lessen temperature-related mortality in snails is their color. Therefore, land-dwelling snails of younger islands tended not to match their backgrounds and instead were more often light in color to prevent overheating. These snails ‘rest’ on cacti and shrubs out in sunlight for up to 11 months out of the year. Conversely, on the older islands, predatory interactions seem to be the more powerful selective factor as compared to thermoregulation.

Kraemer has also taken his interests to a more domestic focus to begin tackling a pressing issue: how human activity is shaping evolution. His current project concerns adaptations to urbanization in plants of the genus Euphorbia, which actually thrive in sidewalk cracks of cities located in the Great Plains area of the U.S. Urban and rural populations will be compared in an attempt to accurately predict how human activity may be causing phenotypic changes in the plants so that they are better equipped to survive in an urban landscape.

Currently, his research involves two undergraduate students. While he has yet to take Creighton students to Galápagos to participate in his ongoing study, he and Parent would like to make it possible in the near future.