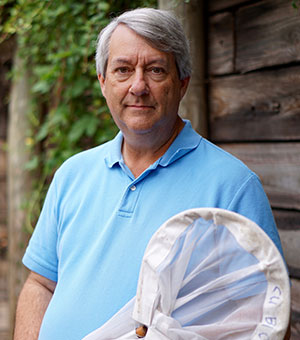 Ted Burk grew up in the small town of Scranton, Kansas, and attended the University of Kansas, graduating in 1974 with a B.A. in Biology. He was a graduate student at New College of the University of Oxford as a Danforth Fellow and Rhodes Scholar, earning a D. Phil. in Zoology in 1979 under the supervision of the controversial evolutionary biologist Richard Dawkins. After a three-year postdoctoral fellowship at the University of Florida, he joined the Creighton University Biology Department in 1982, becoming Professor of Biology in 1996. He was Chair of the Department of Biology from 1990 to 2000 and Interim Chair of the Department of Environmental and Atmospheric Sciences in 2002-2003. He has received the Creighton College of Arts and Sciences Dean’s Awards for Excellence in Teaching, Outstanding Advising, and Professional Excellence in Service. He teaches a wide variety of courses at Creighton, including General Biology, Animal Behavior, and Entomology. His research interests are in behavioral and conservation biology, especially of insects; he has authored 30 papers and book chapters and is co-author of the textbook Biology of Animal Behavior. Much of his professional activity now involves “citizen science” projects in which members of the public help collect information important in conservation of wild species and habitats. He is married to Dr. Christine Burk of Birmingham, England; they have four daughters and one grandson.