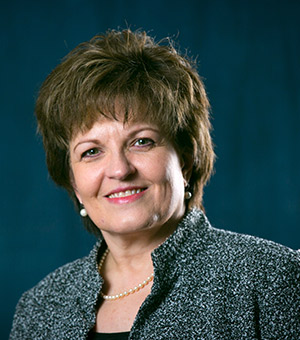 
Susan Walsh proudly followed in her mother’s footsteps as a nursing student at Creighton University.  Building on experience as an Emergency Department nurse and House Supervisor, she began her career in healthcare administration at Creighton University’s Cardiac Center.  Walsh directed operational change including a significant move from the hospital to a freestanding ambulatory center.  She also led Joint Commission Accreditation, implementation of a service excellence culture, and the formation of full-time, rural cardiology offices in Iowa and Nebraska.  Walsh then moved on to direct Cardiac Services at Children’s Hospital & Medical Center where she guided the development of Nebraska’s first pediatric Heart Transplant Program.  She served as a preceptor for Health Administration and Policy (HAP) interns since 2000 and as an adjunct instructor for nine years. In August 2014, Walsh became a full-time faculty member and has been able to combine her passions for healthcare, teaching, and advising.  In 2016, she assumed the director role for the HAP undergraduate program.  Walsh loves watching students light up when they apply textbook knowledge to real-world healthcare administration situations, especially in their internship course.