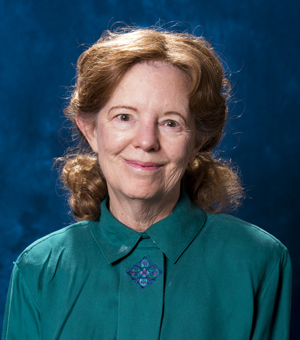 Dr. Mallenby’s publications are diverse and range from effective teaching methods in mathematics, and the use of fuzzy math in ranking politically stable countries, to the historical origins of square dancing, and an overview of the U.S. Healthcare System published in a Soviet newspaper.
As a consequence of Dr. Mallenby’s research into the most cost-effective provision of healthcare to the medically indigent of Nebraska, she gave testimony at legislative hearings and was invited to speak at a national conference on Healthcare Provision to the Poor and Underserved, 1992.
Dr. Mallenby taught a class for Creighton’s Arete program on the historical King Arthur, 2006, and on the effects of television on society, 1997.  She has taught physics and calculus courses for the Health Careers Opportunity Program, and math courses and an English course for Creighton's Upward Bound program.  She and her husband are licensed choreographed ballroom dance (round dance) instructors and gave lessons for the YMCA.
For her undergraduate physics research, Dr. Mallenby wrote the computer program used to analyze thin films through ellipsometry. Said film was developing on cameras on board moon-bound space craft.
Dr. Mallenby was awarded one of two UNL Creativity Scholarships for her poetry and prose in 1969.